BUCKIE High pupils have won a £1,500 cash prize towards a geography, environmental or media-related project, in recognition of their work to create a short film showcasing planning issues in Moray.

As part of Moray Council’s consultation on the Local Development Plan (LDP) 2020, secondary pupils were invited to take part in a competition to produce a short film setting out the main planning issues that young people in the area are likely to experience over the next 10 years.

“Our Development Plans team are very keen to capture the views of young people as the LDP 2020 will influence affordable housing provision, job opportunities, health and well-being, and the attractiveness of places which directly impact on the lives of younger generations.

“It’s important to reflect their needs and aspirations as what’s planned for now will directly impact on their lives. Failure to engage with young people will adversely impact on the priorities of the Community Planning Partners particularly in terms of retaining a younger population.”

Rory Stanley, from Elgin Academy, was commended for his work to produce a series of short films for the Main Issues Report, shown at the roadshow of exhibitions held between January and March, which almost 1,000 people attended, and on social media.

Chair of Moray Council’s Planning & Regulatory Services Committee, Cllr Marc Macrae, praised the quality of the films created by pupils as he presented the prize at Tuesday’s meeting.

“Engaging our young people in Moray in the planning process from an early stage is vital because it shapes their understanding of how important a role it plays in Moray’s future. Likewise, hearing what’s important to them helps us form our plans accordingly, making sure what we’re planning now is fit for their future.

“I’m delighted that our youth engagement initiative has been so successful. As well as these short films, our planning officers have worked with pupils, developed interactive mapping and are planning standalone drop-in events targeted at young people. We’ll continue to build on this success and ensure young people are represented.”

The presentation to pupils comes at the end of a 14-week period of public consultation carried out by planning officers, to gather views on proposals for development across Moray.

A series of 11 drop-in exhibitions has been held across Moray, attended by over 950 people who were able to use touch screen, interactive mapping to explore proposals and watch short films. The consultation closed last week with around 400 comments received on a range of issues.

The responses will now be reviewed and considered by Planning Officers, who will report back to the Planning & Regulatory Services Committee with their recommendation. 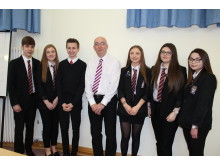 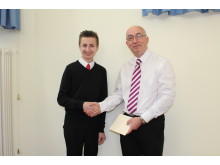