Parents Amy Coull and Craig Ferguson registered their son Harry at Elgin’s Registrar’s office, nine days after he became the first baby to be born in 2018.

What sleepy Harry didn’t know that he was automatically enrolled as a library member as part of the process.

Moray Council’s library service pioneered the membership-at-birth scheme, where every child born in the area is issued with a library card.

The aim is to encourage parents and children into an early reading habit. Other councils have adopted the idea since it was launched over two years ago.

Senior librarian, Jane Sandell was at the ceremony yesterday to present Harry with his membership card, and some picture books.

“It’s really is never too soon to introduce babies to books, and we have lots for him to choose from,” she said.

“We hope that first-time parents Amy and Craig will enjoy using the library too – we have lots of books on parenting!”

Harry was born at Dr Gray’s Hospital in Elgin just ten seconds after midnight on January 1st, and is credited with being the first baby of 2018.

“I’ve been a registrar for 30 years next month, and this is the first time I’ve recorded the time of birth as four zeros – we don’t record seconds,” she said. 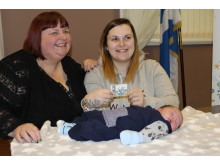 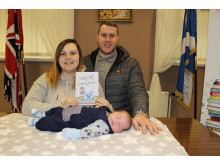 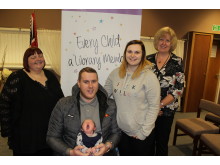