THE line-up for Moray’s popular annual book festival has been revealed and tickets are now on sale.

The Spirit of Moray Book Festival runs from 11 – 15 September and Sally Magnusson and Stuart Cosgrove are just some of the names confirmed to attend.

Sally will be in conversation about her acclaimed debut novel The Sealwoman’s Gift and Stuart Cosgrove, recently seen on BBC’s Rip It Up documentary about Scottish music, will be contemplating Soul Music and Social Change.

John Buchan’s hero takes centre stage as Robert J Harris rekindles the Hannay of The 39 Steps fame; visitors can hear Robert talk about this reincarnation and the most recent novel, Castle MacNab.

Best-selling authors Isla Dewar and Fiona Gibson make an appearance on Thursday 13 September when they talk about their recent novels It Takes One To Know One and The Mum Who Had Enough.

The art world is highlighted when Helen Bellany talks about her life with artist John Bellany on Friday 14 September.

On Saturday 15 September Les Wilson will be recounting the sad tale of a World War I disaster which occurred off the coast of Islay in 1918 and explored in his book The Drowned and the Saved. Naturalist, nature photographer and writer Polly Pullar recounts the antics of pine martens near Ardnamurchan as in her book A Richness of Martens.

Following the success of the inaugural literary dinner at last year’s festival, Moray libraries are delighted to offer again a delicious three-course meal prepared and served at Johnstons of Elgin, and this year crowned by an after dinner talk by whisky aficionado and author Charles MacLean.

The schools’ programme showcases an array of the finest Scottish talent both new and established. The authors presenting for children this time are Emily Dodd, Cathy Cassidy, David MacPhail, Diana Hendry, Chae Strathie, Janis Mackay and Emily MacKenzie. This fine collection of writers and illustrators are set to entertain with stories about pirates, Vikings, pop bands and dancing wildlife.

Families with small children are not forgotten as Bookbug invites those with babies and toddlers to a Family Festival Frolic with songs, rhymes and stories being the order of the day. There are two sessions but places are limited and so booking is essential.

The Spirit of Moray Book Festival public events begin at 4pm on Tuesday 11 September with a free but bookable event presented by the National Library of Scotland about their International Style of Muriel Spark exhibition, part of the 2018 Muriel Spark 100 celebrations.

This festival once again has something for everyone and bookings can be made via Moray Council’s website: www.moray.gov.uk/moraybookfestival. 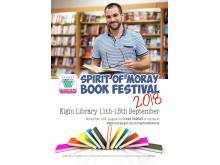