JOB opportunities in Early Learning and Childcare (ELC) in Moray are being showcased in a new video released by Moray Council.

The sector is undergoing a huge transformation and jobs boost as Moray Council rolls out the Scottish Government’s initiative to increase funded hours to 1,140 hours to three and four year-olds, and eligible two-year olds, by 2020.

Moray is phasing this in from August, with an additional 120 children benefitting from the increased hours this year.

Due to the expansion, an increase in workforce is required within Moray Council nurseries and potentially with private providers too. A recruitment campaign is ongoing with the first of the expansion vacancies already filled.

The video release coincides with an ELC Live! Facebook Q&A on Thursday 26 July between 7.15pm-8pm – where anyone can ask questions of Moray Council’s ELC team. Whether it’s a parent looking for details of their nearest nurseries or someone looking for a career change – the ELC team will answer questions put to them live on Moray Council’s Facebook page.

“Supporting children in the earliest stages of their education is such a rewarding job and with the expansion of early learning in Moray upon us there are significant opportunities in the sector. This video and the online chat will give those interested in a new career a flavour for how fulfilling these roles can be.”

More information on the expansion for parents can be found online here: http://www.moray.gov.uk/moray_standard/page_116586.html

Further career information can be obtained from the ELC Academy website: https://elcacademy.scot/ 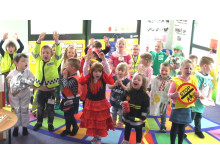