The British Sign Language (BSL) Plan 2018-2024 for Moray was today approved at a meeting of the Full Council.

The plan sets out actions that Moray Council will take over the next six years to make information and services more accessible for BSL users. It contains actions across all services as well as specific actions in relation to family support, early learning and childcare, education, training, work and social security, transport, justice and democracy.

A consultation with BSL users in Moray on the plan took place in July and August. During this consultation it became clear that BSL users face many barriers. Some of these can be addressed by relatively simple actions that are contained in the BSL plan.

Others, such as the need for a more robust infrastructure for BSL interpretation and an acceptance of BSL as a language in its own right, will require a more long-term partnership approach between the Scottish Government, local authorities and BSL users.

In adopting the BSL plan, Moray Council has made a commitment to supporting such an approach.

A video with the BSL version of the plan is available online.

DVDs with the video are also available free of charge at the Moray Deaf Club, libraries and Moray Council Access Points.

For further information about the BSL plan, please contact: 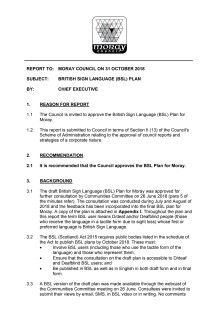