To mark 100 years of the Royal Air Force, pupils in the music department took part in a competition to write a song on the theme of ‘War in the Skies’. Working with professional musician Marty Longstaff and their music teacher, Anna Mulford, the pupils created their entry, which scooped first place in Never Such Innocence’s ‘Songs of the Centenary’ competition.

The awards ceremony took place at the Guard’s Chapel in Wellington Barracks, at which the Lossiemouth High pupils performed their winning entry. They’ve since been invited by RAF personnel to perform in Edinburgh and Glasgow.

This Thursday the group will perform locally at RAF Lossiemouth, followed by the school’s summer concert later this month.

Principal Teacher of Performing Arts at Lossiemouth High, Heather Scott, said the pupils were delighted to celebrate their success in the UK capital.

“They are such fantastic ambassadors for Lossiemouth, and Moray, and did themselves proud representing Moray at such a prestigious event.”

“It’s an exceptional achievement for these pupils to have won this competition, recognising something that’s of national importance, but also very significant to the communities within Lossiemouth itself.”

Lady Lucy French, Founder and Chief Executive of Never Such Innocence said: “Lossiemouth High School are very deserving winners of the Songs of the Centenary competition. The Sky is the Limit is a wonderful and uplifting song commemorating the First World War but also celebrating 100 years of the Royal Air Force.

"When we visited Moray we were incredibly impressed by the hard work and creativity of all the young people so I hope the whole community are very proud of this achievement.” 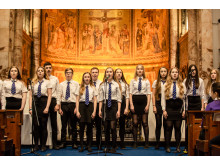