Some delighted residents accepted the keys to new homes in Dufftown yesterday.

The 19 council properties are the first new housing to be built in Speyside for a generation, and will be occupied by predominately local families.

The £2.5million contract for the energy efficient development was awarded to Elgin-based Robertson Northern, who were on site yesterday with Moray councillors to welcome one new tenant, Louise Clark, to her home.

Louise’s move into her specially adapted, wheelchair-friendly home marks a new era for the 21 year old, who is looking forward to having her own place for the first time.

Ahead of celebrating her birthday later this month, she said: “I’ve been living with my parents, so like many in that situation it’s so exciting to have my own place and independence.

“I had a look round last week and it’s been built so I can manage everything. It’s just lovely and I can’t wait to move in.”

Eight of the houses are cottage flats, some specially designed for older people.

The brownfield site was previously home to a cooperage and an auction mart, and was purchased by Moray Council in 2014 to help meet demand for low-cost housing in Speyside.

Chair of the Moray Council’s Communities Committee, Councillor George Alexander, said that the energy-efficient homes will mean that a number of tenants will be able to stay in the area instead of relocating to town centres elsewhere.

“Moray Council is committed to building affordable housing in all our communities,” he said.

“This investment in Dufftown is one of many affordable homes projects to come to Moray, and will give some relief to the housing shortage in Speyside.

“These homes will be economic in energy terms which should help reduce fuel poverty, and will have turned an ugly industrial site into a pleasant development.

“It pleases me no end to have them ready in time for a spring handover.”

The Council’s policy on new build lettings in rural settlements of Moray favours occupation by tenants with local connections or desire to live in the particular community. Under this policy the Council will regard the applicants’ first area choice

as the primary factor, and their points’ level as secondary, with the aim of supporting the sustainability of fragile rural communities.

The properties are part of a commitment to the building of 500 new homes across Moray over the next decade. The mix of accommodation is as follows:
8no one bedroom flats
3no two bedroom bungalows
6no three bed houses
2no four bed houses

New council housing has risen rapidly from the ground in Dufftown since work started in March. Roofs are already on the 19 energy efficient houses, which are due to be completed by the end of the year. Yesterday local Moray councillors visited the site to review progress and were given a guided tour by construction staff. 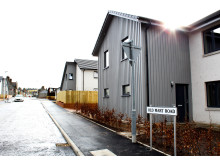 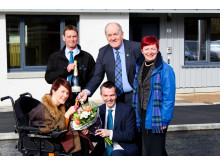 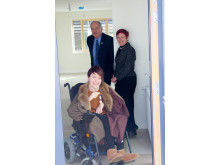 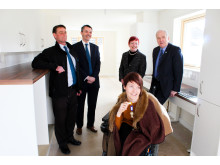 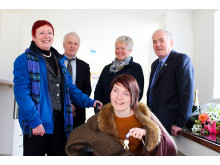