The latest Royal Navy Offshore Patrol Vessels, HMS Spey, has been officially named at a ceremony in Glasgow.

The ship is the last one of five in the Navy’s OPV fleet to be built by BAE Systems in Glasgow, and is formally affiliated with Moray Council.

The ceremony follows an invitation in October 2017 from Captain Chris Smith ADC, the Royal Navy’s Regional Commander for Scotland and Northern Ireland, to Moray Council to enter into a civic affiliation.

A bottle of Speyside Distillery whisky was smashed against the hull and, with the naming ceremony complete, HMS Spey will undertake sea trials before entering into service by the end of 2021.

Cllr Donald Gatt said he is proud to have attended the ceremony.

Cllr John Divers, who served in the Royal Navy, including at the former HMS Fulmar base in Lossiemouth, said he is pleased to see the ship’s progress.

“HMS Spey is an impressive ship - the last in this fleet of five to be built. It’s an honour to be invited by Captain Chris Smith to establish a civic affiliation to Moray Council, and personally for me to have attended the naming ceremony.”

At 90 metres long and weighing 2,000 tonnes, HMS Spey is expected to carry a 30mm cannon and a flight deck capable of receiving a Merlin helicopter, in support of counter-terrorism, anti-piracy, anti-smuggling and maritime defence operations.

Leader of Moray Council, Cllr Leadbitter, said: “The affiliation between Moray and HMS Spey has been cemented with the naming ceremony. As the ship's company is built up over the coming weeks that relationship is set to grow and flourish, strengthening the link between the ship and our region.” 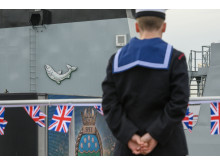