ANDERSON'S and Logie Primary Schools have been awarded Gold by Unicef UK’s Rights Respecting School programme – the first schools in Moray to achieve this.

The Rights Respecting Schools Award is granted to schools that show commitment to promoting and realising children’s rights and encouraging adults, children and young people to respect the rights of others in school. Gold is the highest accolade given by Unicef UK and shows a deep and thorough commitment to children’s rights at all levels of school life.

Head Teacher at Anderson’s, Maureen Mooney, said all the staff and pupils are delighted to have secured this award from Unicef.

“For our pupils to unanimously agree that they feel safe in school and that their rights are respected shows that the environment we strive daily to provide is having a profound experience on their learning and wellbeing.”

Meanwhile, Head Teacher at Logie, Helen Douglas, said the programme has helped develop the ethos of the school and champion the rights of children around the world.

“Through the commitment and hard work of all members of our learning community, our children have a very strong sense of equity, equality, diversity and dignity and are well placed to make a difference to the lives of others now and in the future. We are thrilled that this has been recognised by Unicef as part of our Gold Level accreditation. We have ideas in the pipeline to further empower others to make a difference to the lives of children, no matter where they are in the world, to ensure they have full access to and enjoy their rights.”

The award recognises achievement in putting the United Nations Convention on the Rights of the Child at the heart of a school’s planning, policies and practice. A Rights Respecting School is a community where children’s rights are learned, taught, practised, respected, protected and promoted.

Unicef Rights Respecting Schools Programme Director, Frances Bestley, said: “Children at Logie and Anderson’s Primary Schools understand and are strongly committed to children’s rights. They have played a strong ambassadorial role with other schools in Scotland and from further afield, and the schools are fully committed to engaging and empowering all children to have a voice and develop as leaders. Upon entering the school premises, it is clear that the Convention is central to both schools’ ethos and we are very pleased to be awarding them with Gold: Rights Respecting, the highest level of award granted by Unicef.”

The Unicef UK Rights Respecting Schools initiative is aimed at schools across the UK, including those in an early years setting. This year the programme has received additional support from The People’s Postcode Lottery. This vital funding is helping Unicef UK continue its work with over 4,500 primary schools, secondary schools, schools for children and young people with special educational needs and pupil referral units across England, Northern Ireland, Scotland and Wales. Schools have reported a positive impact on pupil behaviour, relationships and well-being by enhancing pupil’s self-esteem, leading to less truancy and bullying, better learning and improved academic standards. 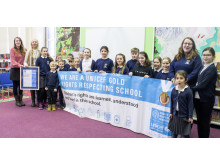