Kind-hearted former Anderson’s Primary pupils have donated more than £700 to charity after a successful fundraiser.

Each year as part of their enterprise project, Primary 7 pupils hold a fundraiser to raise money for their leavers’ celebration.

Their excellent effort saw them fund the hiring of a bus, day entry to Landmark, a personalised hoodie and yearbook for every P7 pupil. Like previous P7 leavers they also wanted to leave a legacy to the school, and on top of this donated the remaining £735 to Mary’s Meals.

“The children wanted to move the rope beam in the gym hall to a different position that would enable it to be used more easily without the pre-planning and preparation that was required. The cost for the work was £390. The ropes were repositioned during the summer holidays and has already been a great hit with staff and children alike, who have all been making good use of the easy access to the apparatus.

“The P7’s chosen charity was Mary’s Meals. A cheque for the remaining £735.89 was sent to the charity. Mary’s Meals sent the school a certificate and a letter of appreciation.

“To all of our Primary 7s of 2019, now S1s, we thank you most sincerely and hope you continue to be a shining example of community spirit.” 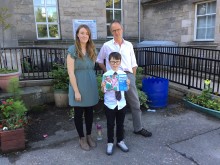