The ceremony, organised by Keep Scotland Beautiful and hosted by East Lothian Council, supports the achievements of entire villages, towns, cities, residential communities and Business Improvement Districts Scotland-wide in helping to improve the places they care for.

Forres in Bloom secured Gold in the Medium Town category and was also presented with the Community Involvement Award. The group has existed for almost 30 years and has gone from strength to strength with unwavering support from the local community.

Forres in Bloom was commended for its work with primary and secondary schools, environmental groups, community groups and many more. The judges noted that it was clear the whole community supports the group.

Forres councillor Claire Feaver said: “This is a wonderful recognition of the extraordinary amount of work that has gone into making Forres a floral showcase. Just the other day I met a volunteer at Anderson’s Primary and was very impressed by the elaborate system she had devised in order to water the floral displays that run the length of the playground. It is just one example of the commitment of the Forres in Bloom volunteers. The fact that there is so much colour on show in town despite one of the driest summers on record is testament to an awesome amount of work by everyone concerned.”

Cllr Lorna Cresswell said: “I’m delighted to hear the news. Living on the High Street and opposite Grant Park I see the daily work of volunteers. This award is so well deserved.”

Pete Leonard, Operations Director of Keep Scotland Beautiful, commented: “Now in its 52nd year, Beautiful Scotland continues to provide the opportunity to celebrate the achievements of Scotland’s volunteers, local authority staff and businesses and to recognise the tireless efforts of communities across the country who work to clean up, green up and beautify Scotland’s villages, towns and cities.

“I would like to commend Forres in Bloom for its fantastic work. It is thanks to their efforts that local spaces and places they treasure are maintained to such high standards.”

Beautiful Scotland is managed by Keep Scotland Beautiful, a member of the Bloom Federation which is run by the Royal Horticultural Society (RHS). All entries are judged by an expert team on their year-round achievements and the awards are presented to those who achieve the highest scores in their categories. Discretionary Awards are also given to those who demonstrate excellence in their commitment to the campaign.

Andrea Van Sittart, RHS Head of Community Outreach, said: “Congratulations to this year’s Beautiful Scotland winners whose dedication and commitment to keeping their communities clean and green is incredible. Some of the creative ways that Scottish groups have improved sustainability by recycling and reducing waste, got children involved in the growing and embraced wildlife-friendly planting have really shone out – they are an inspiration.” 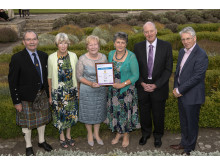