Moray Council facilitated a meeting between two groups on either side of the Findhorn Bay wildfowling lobby yesterday. Representatives from other interested groups also attended, including Findhorn Community Council, Local Nature Reserve, RSPB, British Association for Shooting and Conservation and Scottish Natural Heritage.

Chairing the meeting was Cllr John Cowe. Both sides of the lobby had submitted petitions to his Economic Development and Infrastructure committee, and he invited interested parties to the meeting in a bid to find a compromise that both parties would accept.

Although no clear position was agreed upon yesterday, both petitioners agreed to further talks in the hope of reaching agreement.

Cllr Cowe said the council will not be coming down in favour of either side.

“Our role here is merely to facilitate,” he said.

“It is up to both sides to find a compromise they can all live with. Like all compromises it will not be exactly what each side wants, but we all have to give a little if we are to share the same spaces.

“I felt there was some movement from both sides so I’m hopeful that an accommodation can be reached before the start of next season.”

The council will be emailing representatives of both sides clarifying the outcome of yesterday’s meeting, and invite further discussion around the points made. 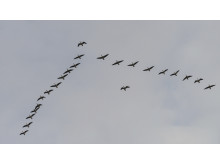