Two 3rd-year students from Elgin Academy are celebrating after scooping top awards in a national competition.

Fiona McCafferty won first prize in the graphic novel category. Judges praised her work as ‘visually outstanding’ and of such a high standard it would already read as a published graphic novel. They said: “Our panel loved the way the story was told in this comic strip. The spooky atmosphere of the book The Haunting of Jessop Rise is superbly conveyed in the artwork; the pace of the scene is well judged; there is clever simplicity in the panels, with one of them just completely black, which works really well; and the way images are framed captures the tension of the scene.’

Rhys Nelson was awarded second prize in the same category, with judges commending his ‘really very strong use of panels and display’. They said: “We really liked the different techniques used in this comic to convey the contrasting moods in the scene. The bird's eye view of the maze in the bookChildren of Icarus conveys the excitement of the scene but takes on real menace when we consider how vulnerable it makes the children look.”

To enter the competition students must read three new books, discuss them and vote for a favourite. They then have to create a graphic novel or a trailer for their chosen book.

Six other students were highly commended for their use of cinematography and editing in the trailer category. They are: Lucy Lloyd, Millie Beckett, Aimee Hendry, Marcelina Grygiol, Grace Salt and Erin McCulley .

The students were encouraged to enter the competition by the school’s librarian, Shelagh Toonen, who herself received an accolade from the Scottish Book Trust in the same week.

It follows her recognition at the School Librarian of the Year Awards 2017, at which she was runner-up.

This latest success celebrates Shelagh’s commitment to going above and beyond her call of duty to pass on the ‘reading for pleasure’ message to the next generation, and who works tirelessly to inspire children to read and write.

Marc Lambert, CEO of Scottish Book Trust, said: “The judging panel was particularly impressed with how she has made the library a hub for cross-curricular activities, using the pupils’ own cultural interests to engage them in books and reading.”

Head teacher for the academy, David Barnett, said: “Shelagh is an outstanding asset to our school and is a passionate advocate of the power of reading. Her innovative work, drive and enthusiasm has rightly been once again recognised at national level.” 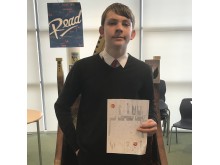 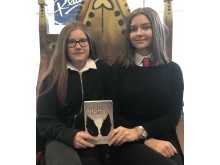 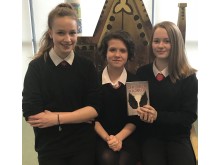