Moray’s performance on equalities has been highlighted as an example of good practice in a national report on diversity.

Audit Scotland assessed 226 public bodies to ensure the £40billion of public money was being spent properly.

As part of that audit, what was being done to encourage and promote equality in public service was assessed.

As part of the Best Value report by Audit Scotland, Moray Council was described as maintaining its momentum in improved leadership and training on equality. Further, it said that Moray has set refreshed equality outcomes and is monitoring and reporting on progress against them, as well as routinely conducting equality impact assessments.

The Convener of Moray Council, Cllr James Allan – who is also the authority’s Equalities Champion - said the council has come a long way in ensuring that equalities considerations are built into all its processes.

“I’m glad that Audit Scotland holds us up as a model in this area,” he said.

“It is fair to say the council has come a long way in the last 20 years in addressing this important issue, and I genuinely feel we are better at all aspects of our operations as a result.”

Cllr Allan praised the work of the council’s equalities officer, Don Toonen, for his role in ensuring the council has such a good record.

“Thanks to Don and our senior managers, any decision the council now makes has been tested against equalities legislation. These Equalities Impact Assessments (EIAs) have been particularly useful as part of the council’s budget process, and is a major consideration during any re-design of services.”

The EIAs ensure that minority groups are not disproportionately affected by a proposal.

High-res version of pic available under 'related content' below. 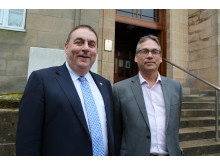