A MAJOR development project at Benromach distillery has today been granted planning permission by councillors.

Eleven new cask warehouses, with a total floor space of seven football pitches (28,688 square metres), have been given the green light on a 4.7 hectare site adjoining Benromach in Forres, more than doubling the footprint of the current operation.

Currently the site is prime agricultural land, but councillors unanimously agreed with planning officials that it was an acceptable departure from the local plan due to its contribution to economic growth, and that substantial landscaping plans would soften the development and enhance the site for wildlife, with biodiversity benefits.

No objections were raised to the development, which is expected to be phased in over a 10-year period.

Chair of Moray Council’s Planning and Regulatory Services Committee, Cllr David Bremner, said the development would be a significant investment in Moray.

“This proposal reinforces the importance of the whisky industry here in Moray and shows the long-term commitment of a global player in the industry, for the benefit of the local economy.

“I’m convinced that this significant investment will instil further confidence in Moray’s future economic growth – a key priority for this council.” 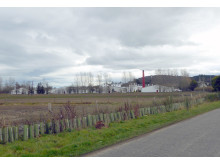