CONSTRUCTION of Moray’s newest primary school gets under way on Monday.

Planning permission was unanimously agreed by councillors in June 2018 for the new £12.8 million Linkwood Primary.

A turf-cutting ceremony took place on Friday to mark the occasion. P3 James Kennedy cut the sod, watched by P1 twins Brooklyn and Maddisyn Hambly, their fellow pupils and councillors.

The new school being built in the south of Elgin and will accommodate up to 462 pupils, including ASN provision for up to 12 pupils, once it’s completed in June 2020. Space will also be provided for 40 children in the nursery.

Pupils will be able to enjoy an external roof terrace, and outside play areas will include a secure area for ASN pupils and multi-use games area (MUGA), as well as an allotment and outdoor classroom.

A wetland habitat area featuring aquatic and wetland meadow planting will include the sustainable drainage system, and solar panels will be installed on the roof of the building.

“This major investment in the new Linkwood Primary School is absolutely vital, with schools like neighbouring New Elgin having been bursting at the seams. Elgin’s population continues to grow at a significant pace and the new school will provide essential capacity to support that expansion.

“Over the coming years hundreds of new houses are planned, particularly on the south side of Elgin, which will provide a steady stream of pupils for the new school.”

Head Teacher Fiona Stevenson, said it’s exciting for the pupils to now see the start of the new school and watch as the new build progresses.

“We’re delighted to begin our journey towards moving to the new school. The children have thrived in their current environment and we’re very fortunate to have had the high-quality facility that we have enjoyed in the interim period. With our new school we’ll be able to build positively on the education provision at Linkwood Primary with the fantastic new facilities, surrounding environment, community and partners as we ‘Prepare for the Future’.

“There has been a lot of planning and engagement with many partners since the conception of Linkwood Primary and our children and families have been very supportive to date. I know from speaking to many of them, that they are really looking forward to moving to their new school and they are very excited to be involved in cutting the turf to mark the beginning of that journey.”

Moray Council is working with hub North Scotland and contractors Balfour Beatty to build the school, which will replace the existing Linkwood Primary currently based at End End School annexe.

Balfour Beatty’s Regional Managing Director for Scotland, Hector Macaulay, said: “With over 500 new houses in development in the local area, we look forward to providing the local children with a school that supports the expanding number of new pupils.

“Having completed Elgin High School in 2017, we are delighted to continue contributing to the local community through this project, which will benefit generations to come. ”

Chief executive of hub North Scotland, Michael Padzinski, said: “Now that construction is under way, we are looking forward to working with Moray Council and Balfour Beatty to deliver a fantastic school for the residents of south Elgin.” 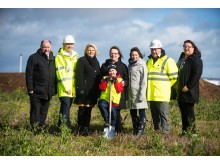 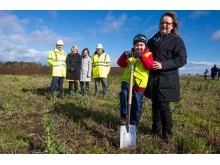 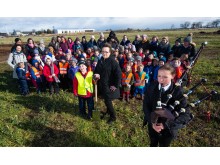 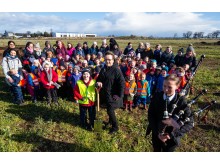