Moray’s association with the sea stretched back generations, and that link is being strengthened further with the naming of a new Royal Navy patrol vessel after the area.

Called HMS Spey, the ship is currently being built by Bae Systems at their shipyard on the Clyde, and will be the last of the new five Offshore Patrol Vessels. She will be formally named in early 2019 and be commissioned later that year.

As part of establishing a close affiliation with Moray through the ship, the patrol training vessel HMS Example took two Moray councillors on a short voyage from Peterhead to Lossiemouth on Friday.

The affiliation between Moray Council and HMS Spey will pave the way for a personal link between the Royal Navy and the citizens of Moray. Once settled, other affiliations with an RAF squadron and Army regiment, and in Moray’s case a Speyside distillery are expected to take place.

At 90 metres long and weighing 2,000 tonnes, HMS Spey is expected to carry a 30mm cannon and a flight deck capable of receiving a Merlin helicopter, in support of counter-terrorism, anti-piracy, anti-smuggling and maritime defence operations. 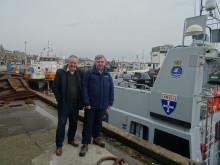 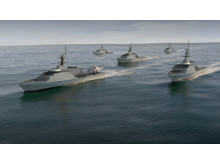